This new years eve I was in Rome, well it was for a short week actually. I really enjoyed the city, and the people there are so lively and alive!

The public transport is very modern there, but the traffic is horrible though. And if you are crossing any pavements, be sure to be self-confident – the car drivers won’t stop for you if not. We visited Rome for 5 days, and really had a good time. Here’s a review with pictures.

Day 1 – Just visited the city and looked for the typical tourist attractions, like the parliament (1), the Pantheon church (2) and the Trevi fountain (3).

Day 2 – We went to the Vatican state and had a guided tour. It almost filled the whole day, so the Vatican’s really worth prioritizing if you’re going to the area. There was a huge amount of people that day, and the lines were endless. For approximately 50 euros we got to skip the line, which was quite nice. Although practical, you really need to follow the group and can’t really use the time you want to see the attractions. It was a little stressful, but If there’s a day with a lot of guests, I would recommend it. If not, you should go by yourself. 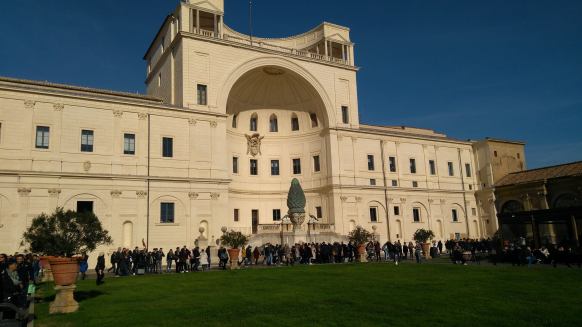 Day 3 – We went to a shopping mall outside the city called Porta di Roma. It was huge, and had a lot of interesting stores, with both italian and international brands. It took about an hour with bus, and you could see a lot on the way too. We also went to a smaller shopping mall in the city of Rome, although the stores were few.

Day 4 – A trip to Naples. We took a 3 hour-long bus tour to see Naples the fourth day, which is a smaller seaport known for its amazing pizza. Although interesting, it wasn’t that much to see actually, but the shopping locations were great and the pizza was quite amazing. The first thing we did was of course to visit “the Incurability pharmacy and hospital museum”. We saw a lot of tools and medicines used during the wars among other things.

Day 5 – New years eve and a visit to Colosseum. The fireworks near Colosseum was awesome that night, and a lot of people showed up. This day, most restaurants were open, which is not the case here in Norway. 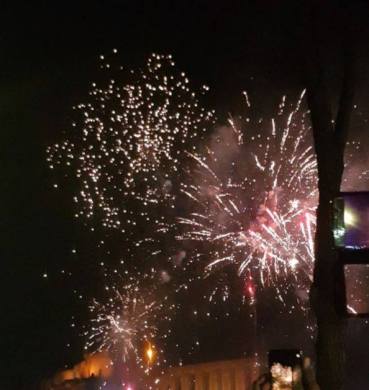 During the Christmas holiday, I read a famous book of the norwegian writer Jostein Gaarder: “Sophie’s world”.

Shortly summarized the story is about a young girl who takes a philosophy course arranged by an old philosopher. Almost all of the famous philosophers from the year 1000 – 2000 is covered, which was quite interesting. Each of them is properly covered, and the content is carefully selected with the most important. The story also tells us about the girl’s everyday life, which is a bit boring I might add. The book contains about 500 pages, and I think that’s a little too long – some of the everyday story could be skipped, I believe.

It has also been made a movie based on the book, I haven’t seen it yet, but perhaps I will later.

So me and my colleagues had a Christmas party this weekend, and we went to Big horn steak house here in Oslo (Aker brygge). The food and the atmosphere was lovely.

I started with a caesar salad. It was quite tasteless, unfortunately, and the dressing was too.

The main course was tenderloin with gratinated potatoes with garlic. The beef was perfect, medium grilled and quite tender. I got plenty of gravy, and the elements were placed elegantly on the plate.

The dessert was also impeccable. We ordered chocolate fondue with caramel flavour. The fondue was soft and creamy on the inside.

It was such a pleasant evening, and I really liked the quality of the food at Big horn steak house, except the starter though.

It is recommended to use peeling 1-2 times weekly to remove dead skin cells, refresh the skin and cleanse deeper. Nevertheless, there are basically two types of peeling formulations on the market: Mechanical peeling creams and chemical peeling creams.

Mechanical peeling creams contain peel grains and are rubbed gently in circular movements. Almost immediately, the cream is rinsed off. This formula fits most skin types and conditions, except for acne and oily skin. The reason why is because of the grinding and movements, which may stimulate the sebum (oil) production and worsen the conditions. These skin conditions should use chemical peelings instead.

Chemical peelings do not contain any grains. On the other hand, they contain acids, which peel the skin chemically. Examples include lactic acid, salicylic acid and hydroxy-acids. Chemical peelings can be used by all skin types except very sensitive or irritated skin. They are the bets choice for acne and oily skin types. Another point worth mentioning is that you should be extra careful in the sun for 1-2 days after the peeling, since it may potentially increase the chances of sunburn.

I’ve heard so much greatness about chia seeds and how healthy they are, so recently I found an easy recipe for chia pudding. 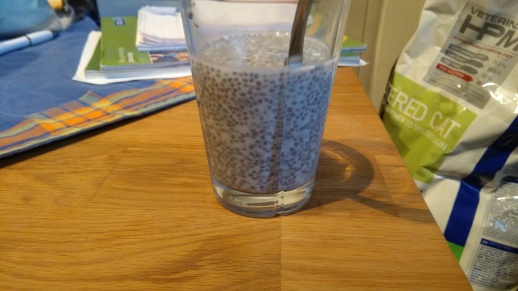 All you have to do is to mix together 2 cups of milk and 2 table spoons of chia seeds, cool it in the refrigerator for 3-4 hours or more and voila! The seeds will swell with time. An extra tip is to stir it additionally after 30 minutes, or else it can get quite lumpy.

You can eat the pudding as it is, or mix it with apricot jam or any kind of jam really, honey, berries or whatever you like 🙂

Recently, I was at a skin therapy session downtown, and the session inspired me to write more about skin types and skin conditions. The skin therapist analyzed my skin, and told me I had normal to oily skin regarding skin type, but that my skin condition (which is not constant), was quite dehydrated. People often mixed the terms dry and dehydrated skin, but they are quite different. Whereas a dry skin is lacking oil/fat, dehydrated skin is lacking moisture (water).

We went over and analyzed my daily skin therapy routine, and discussed what to be optimized.

Here’s what I used before the skin session:

What was suggested to optimize the routine:

I got a tester of a serum they recommended from Elisabeth Arden Pro (Age defyingserum). It was nice and gave the skin more moisture, but it contained lactic acid and a retinoid conjugate, and a few other irritating ingredients, which is not so suit able for my sensitive skin. My skin got redder and a little irritated. I therefore decided to purchase another serum later, I just have to do some research first.

Hi, and welcome to my blog.

I’m a pharmacist living in Norway, and I studied to a master’s degree at the University of Oslo. I’m currently working at a pharmacy, and I’m truly passioned about drugs, cosmetics and all of the chemistry behind it all.

This blog will mainly focus on drugs, chemicals, cosmetics and other health-oriented themes. I will also post some questions that we regularly recieve at our pharmacy, and as a reader you are welcome to ask any questions that you want.